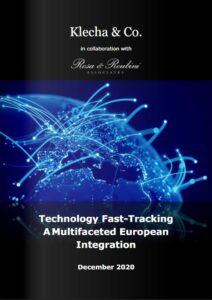 Read on the screen

In this paper we discuss:

The European integration process has been characterized by  a series of setbacks, which have then been followed by important advances. The latest setbacks were represented by the migrant crisis of 2015, the Brexit referendum in 2016, resurfacing euro re-denomination risks in 2018-19 and finally the Covid-induced crisis in 2020. All these events occurred while internationalism was deteriorating, amid the victory of an isolationist US president, mounting trade and geopolitical tensions between major economies, the ongoing balkanisation of global supply and value chains and an underlying technological conflict between  the US and China (in which Russia and the EU were inevitably engaged). The resulting polarisation of the world into spheres of influence dominated by the US and China amounts to what has been labelled Cold War 2.

Given this context, the EU – while implementing Brexit – has been confronted with yet another existential crisis, reinforced and brought forward by the Covid-induced crisis. EU leaders had to decide in just a few months whether to give up the project imagined by the founding fathers, or else re-launch it, and so pass it to the next generation of leaders, who will eventually decide its fate.

The decision to react to the Covid-induced crisis by launching a comprehensive pan-European plan, based on the EU’s Multiannual Financial Framework – significantly dubbed the Next Generation EU – means that current EU leaders have chosen the latter course, making the decision to push integration to new levels.

The novelty represented by a US president who was not just simply isolationist and lukewarm regarding the European integration process, but openly hostile to it and in favour of further exits from the EU, as well as in favour of diminishing the presence of NATO in the region (with the US decision to withdraw many of its troops from Germany) has induced even the most prudent politician of her generation, the German Chancellor Angela Merkel, to declare that the Europeans are on their own and need to grasp their destiny with their own hands, without relying any longer on the external influence, pressures and financial and military subsidies from the US. As we discuss further in this report, the election of Joe Biden is not likely to change this state of affairs. Across Europe, the congratulation messages to Joe Biden started to flow in a coordinated manner within minutes of one another, in a clear message to the newly-elected US President to count on a united front within the EU.

In parallel, the Covid-19 pandemic has hit the EU, showing the essential role played by the technology sector in ensuring the continuity of social life, businesses and government activities, and accelerating the need for sovereign digital technologies. Technology ranging from AI and 5G to Cloud computing – the new battlefields for China and US to assert their global supremacy - has already started to transform every industry, and within a generation will have done so completely. This New Paradigm represents a huge additional threat to each EU country separately, but also represents a once-in-a-lifetime opportunity for the EU if it manages to position itself well in the new global chessboard. We will discuss further in this document the initiatives which have been launched in the field of technology and innovation.

In short, the Europeans have realised that they need to remain cohesive if they want to have a role in the bi-polar world that is about to emerge. In the paper we discuss the main areas of European integration: Financial, Defence and Technological.

Back to R&R Research

Back to R&R Homepage